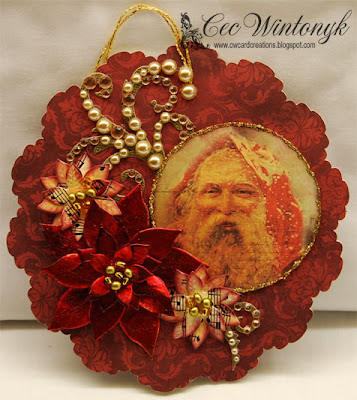 The challenge this week at Sugar Creek Hollow is called AN ALTERED STATE.  We want you to alter something in a vintage or shabby chic fashion.

The Design Team has created fabulous altered pieces for your inspiration and are joined this week by Sandy Mathis as a Guest Designer.  Check out their wonderful projects and then come back and show us your altered pieces.

I have altered an old CD to make another ornament for my Christmas tree. 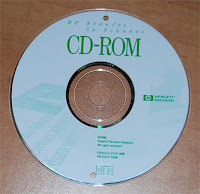 My husband drilled a couple of holes in it for me so I could add a hanging cord and a tassle.  When I was finished with the ornament I didn't like the tassle so I cut it out and I will use it somewhere else.

I printed some card stock with a freebie digital paper from Miss Cutie Pie and then cut two scalloped circles with my Cameo.  The next step was to make the poinsettias using a die from Marianne Creatables.  The little ones were cut from music that I also printed on card stock and the large one is cut from metal sheets by Making Memories that I have had in my stash for a few years.  The little ones were sponged with Aged Mahogany Distress Ink by Ranger and the metal one was sealed first with Mod Podge and then inked with Cranberry Adirondack alcohol ink by Ranger and then sealed again. All the flowers have centres made of beads from my stash (leftovers from the days when I made headpieces and decorated bathing suits for my daughter's synchro competitions).

The flourish was cut from DCWV gold metallic card stock with the Spellbinders Venetian Motifs die.  It looked flat so I added some gems from Dollarama and pearls from Prima to it.  The image is from The Graphics Fairy and after I cut it out, I added gold Liquigems from Liquitex around the edge.

By the way, I discovered when I was making this ornament that occasionally something that goes wrong can end up looking pretty cool.  When I put the ink on the metal poinsettia, I didn't realize that some of the fiber was coming off the felt pad I was using until I started to seal it and all of a sudden there was this mess of fibers sticking to the Mod Podge.  I pulled some off with tweezers but couldn't get all of it off.  I almost threw it in the garbage and started over but when it dried, it actually looked interesting so I kept it.

Crafting For All Seasons - Anything But A Card
Emerald Faeries - Bling
4 Crafty Chicks  - Circles
Charisma Cardz - Die Cuts
Paperminutes - Real Metal
Artistic Inspirations - Use Some Metal
The Shabby Tea Room - Anything Goes
Posted by Cec at 8:00 AM