Come Into My Garden 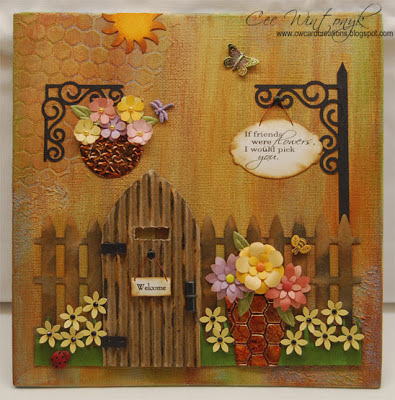 The new challenge at Sugar Creek Hollow is called MIXED MEDIA so we want you to use other things besides paper in your vintage or shabby chic project.

I don't think my project is either vintage or shabby chic and it certainly looked better in my head (don't you just hate when that happens) but it was fun to do.  I have a dear friend who is going to have knee replacement surgery in a couple weeks and I wanted to make something cheerful for her so I decided to make this canvas vignette.

Here are the details but it is going to be a long post so if you are interested, I suggest you grab a coffee - or better still a glass of wine.

I started with an 8" x 8" canvas that I picked up at Dollarama and gave it a coat of Liquitex Gesso.  Then I took some Golden Light Molding Paste and spread it thinly over a honeycomb stencil that a friend cut for me with her Cameo and then peeled the stencil back.  I also dabbed some of the paste in a couple of spots - just because I could.

Once the paste was dry I painted it with Folk Art French Blue and then I covered most of that up (daaah) with different colours of Golden Fluid Acrylics (Yellow Ochre, Green Gold, Naples Yellow Hue & Burnt Sienna).  I thinned out some Golden Red Oxide and spritzed it over the stencil hoping it would land in the grooves and I suppose if you look really, really close you can see some.

The gate is made with corrugated cardboard that I coated with Mod Podge and then inked with some Walnut Stain Distress Ink (Ranger).  The hinges are just black card stock and the handle is a shelf peg from my husband's tool box.  The fence was cut from Recollections Kraft card stock using my Cameo and was then inked with some Rusty Hinge, Vintage Photo, Walnut Stain and Black Soot Distress Inks (Ranger).  The grass was part of the same file as the fence and I inked it with some Forest Moss Distress Ink (Ranger).

The plant pots were both made from foil tape used by heating & air conditioning techs.  The big one was embossed with a Tim Holtz Honeycomb Texture Fade while the hanging pot was just textured using an embossing stylus.  Both pots were coloured with a combination of Terra Cotta and Butterscotch Adirondack Alcohol Inks (Ranger).

The flowers were all made from paint samples that I grabbed from Home Depot and cut with a variety of EK Paper Shapers flower punches.  I used Making Memories brads for the centres in the flowers in the big pot, Dollarama gems for the little yellow flowers and Recollection pearl stickers in the flowers in the hanging pot.  The leaves are cut from some ribbon from Really Reasonable Ribbon.

I made the sentiment in Photoshop and cut it using a Spellbinders Labels Ten die.  The Welcome sign was computer generated.  Both were inked with Vintage Photo Distress Ink (Ranger) and hung with some copper wire from Artistic Wire and a black brad from Making Memories.  The hangers were cut from Recollections black card stock using my Cameo and a corner file from Bird's Cards.

The sun was made with a Marvy Uchida punch and inked with some Rusty Hinge & Vintage Photo Distress Ink (Ranger).  The butterfly was a silver charm from my stash and I dabbed it with some Terra Cotta Adirondack Alcohol Ink (Ranger) along with some bright green and bright blue that don't have names on the bottles (gee thanks Ranger).  The bee, lady bug and dragon fly are all buttons from Dress It Up.

Whew - are you still with me?  If you are bring your wine and join me in the garden - I like red by the way :)