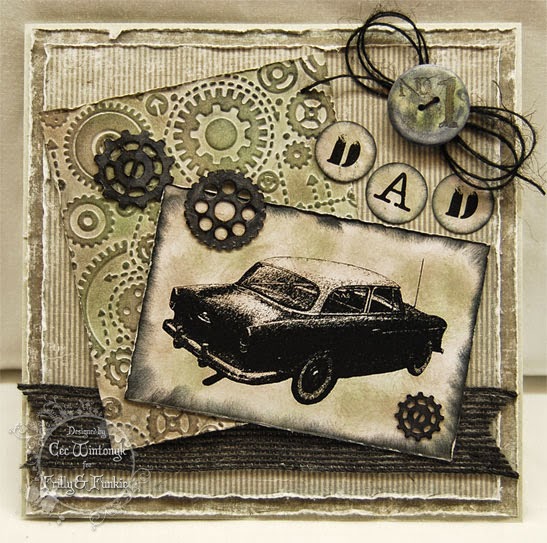 The new challenge at Frilly and Funkie is called For All Our Fathers and with Father's Day fast approaching we want to see vintage or shabby chic projects for a Father in your life - your own Father, your Husband or any other fellow who is a Father.

I haven't had a Father in my life for more than 30 years so whenever I make a card for Father's Day, it is either for my Husband as this one is or for my Grandchildren to give to their Dad.

I am on the Frilly side of the team at Frilly and Funkie and while I had some initial trepidation about making something for a guy that would live up to that without looking feminine in the end I think I managed to pull it off.

I am going to be presenting the Saturday Step X Step on June 7th so come back then for details on this card.  I can tell you a bit about the image though.  The other night I was asking my Husband to remind me what kind of car he had for his first car and he told me it was a 1959 American Motors Rambler - black with a white top.  This is an image of that model of car and when you come to Frilly and Funkie on Saturday, I will tell you how I made it.

The funny thing is that my first car was also from American Motors and was a 1974 mint green Hornet Hatchback.  It was a nice car (as all first cars are) but it was only a two door model and as time went on the weight of the doors caused problems and after we had our daughter, it became a pain to put her in and out of the back seat.  There have been lots of cars since then and all have been four-door models.

I will be entering this card in the following challenges:

I have used the following products from The Funkie Junkie Boutique in the creation of this card: