Vintage Garden for Anything But Cute

The day has finally arrived for the first challenge at the Anything But Cute Mixed Media Challenge Blog.  Branka is our hostess this month and she is calling it Vintage Garden.  Here is how she described it:

What do you think of when you hear the word Garden? Is it flowers, birds, butterflies, dragonflies, bees, lattice, vines, fences? Whatever garden vision you have, we want to see it. But make sure it's in a vintage style. 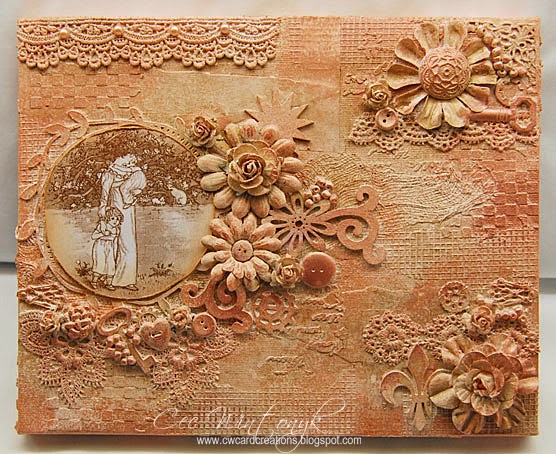 I decided to make a canvas  - you can click on it to get a larger view.  If you have followed me for a while you know how much I love vintage images so I went searching for something to use as my starting point and found this sweet image of a Mother and her children strolling in the garden at The Graphics Fairy.  It was coloured and I started to work with one of the colours in the photo but in the end changed it to sepia and then set it aside as it was the last element to be added.  Of course I had to add flowers to my project because it is supposed to remind you of a garden.

I started by giving the canvas a coat of Gesso.  Next I added some strips of torn paper, drywall tape and strips of washi tape.  Next I added some Golden Light Molding Paste through a TCW stencil called Mini ledger and a Wendy Vecchi stencil called Checkmate.  The drywall tape and stenciling was done on the sides as well.  The final texture on the base was achieved by gluing some cheesecloth across the middle of the canvas. 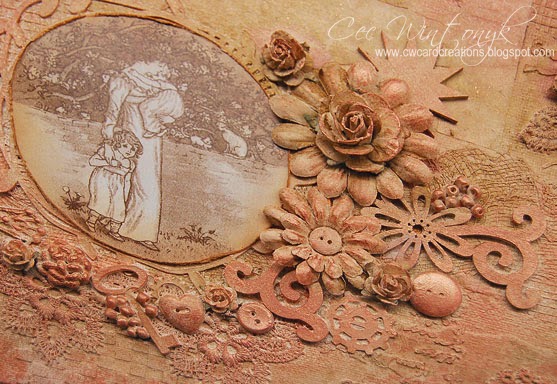 I used my Cameo to cut a wreath "mat" for my image from Tim Holtz Grunge Paper and coated it with Gesso.  Then I grabbed all sorts of lace, flowers, wood and chipboard embellishments, buttons, beads, cogs and metal pieces and glued them in various places on the canvas.  Some were already in colours that were not very complimentary or were in raw form so I gave them a coat of Gesso before they were glued down. 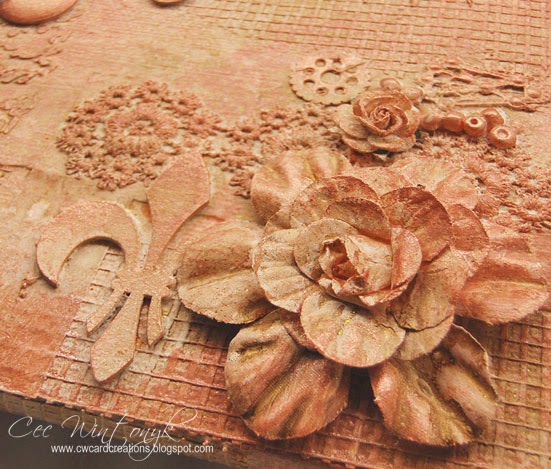 I wanted to add some spray inks and here is where I discovered I have a love/hate relationship with them.  I really like the look of them on a project but the spray bottles do not like me and constantly want to clog.  I am not one to be stopped though and when running everything under hot water to try to clear the clog didn't work, I found a work-around that gave the same result.  I just poured a little of the spray in a tiny container, stirred it well and dipped a natural sea sponge in it and sponged the ink on where I wanted it. 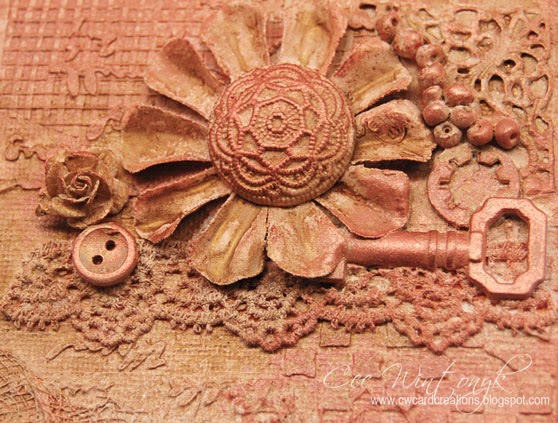 Next I rubbed Rose Quartz wax paste by Treasure Gold over many of the high spots on the bits and pieces and finally added the vintage image.

I hope you will join us for the first challenge and show us your Vintage Garden mixed media project.  You have until June 4th to share your project with us.  The Design Team will be choosing their top picks and one deserving crafter will be invited to join us as a Featured Artist.

Email ThisBlogThis!Share to TwitterShare to FacebookShare to Pinterest
Labels: Anything But Cute, canvas, mixed media, vintage