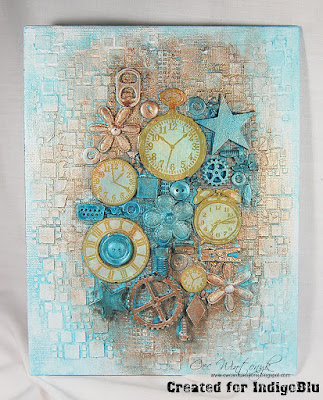 It is my turn to show you my shared project for IndigoBlu this month.  The theme is called Tell Me A Story and I was asked to create a story about my project.  I thought rather than weaving some sort of tale around what I have done (I am not that good at fiction anyway) I would be a little cheeky and state the obvious.  Most of us, me included, are always complaining about not having enough time so my story is that I have made lots of time for myself - in the form of a canvas full of clocks.  Now if only I could find that extra time and still do everything I wanted in a day, that would be a story. 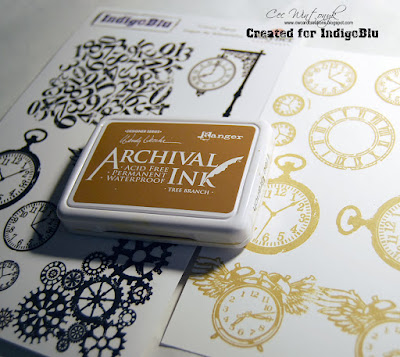 I started by stamping multiple copies of stamps from the Good Times set using Wendy Vecchi's Tree Branch Archival Ink.  I fussy cut all the clocks and then also cut a blank outline of each clock. 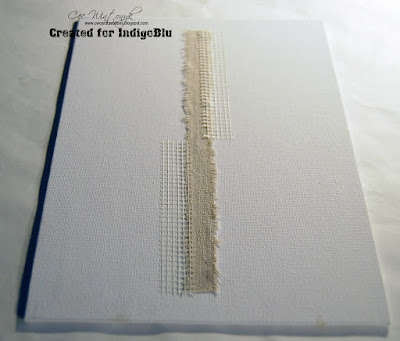 Next I added some texture to a dollar store canvas in the form of some canvas ribbon and some drywall tape.  I decided I needed more texture so I used some texture paste through the Texture stencil. 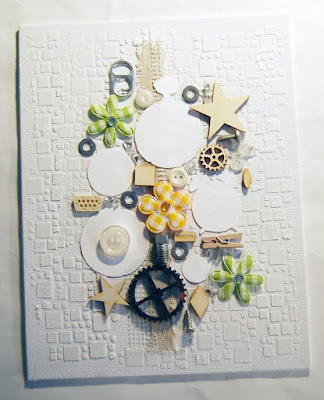 Once the stenciling was dry I laid down all sorts of bits and pieces using the blank clocks as markers for where my stamped clocks were to be placed later.  I used Super Thick Slap it On as my adhesive and once it was dry I gave everything two coats of Gee-Sso Good White Gesso to unify the colour. 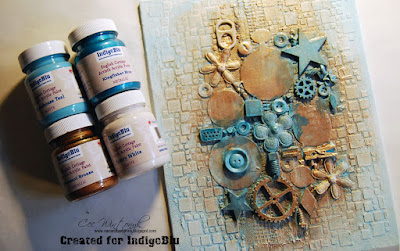 The next step was to paint the canvas, which I did randomly and in layers wiping back some of the paint with a baby wipe in certain areas.  I used Townhouse Teal, Kingfisher Blue Metallic, Pantry White (that was mixed with some Kingfisher Blue) and Pheasant Bronze Metallic. 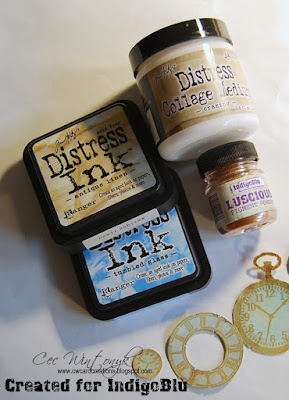 The clocks were coloured next by inking them with Antique Linen and Tumbled Glass Distress Ink.  Then they were coated with Crazing Distress Collage Medium.  Once they were dry they were painted with Bronze Luscious mixed with some water and then carefully wiped where the distress inks with a baby wipe to remove some of shimmer.  Once the clocks were dry they were glued on top of the blank markers on the canvas.  Finally I used a bit more of the Luscious randomly on the canvas to add even more shimmer.

I will be back next week on the IndigoBlu blog with another project and this one really does have a story to go with it.  In the meantime pop over to IndigoBlu and check out what my team mates Solange and Ksenija have created.
Posted by Cec at 5:00 AM