The challenge this week at Isabella's Sketchbook is to do something in the colours of our country (in my case, red and white) with a Memorial Day theme.

In the United States, Memorial Day is the unofficial start of summer so that usually brings to mind cookouts or picnics, going to the beach, relaxing with family and friends or spending time in the garden.  However, when I looked up the meaning of Memorial Day, I discovered that it is the day to honour and remember those men and women that have lost their lives in the service of their country.  I decided that even though Canada does that on November 11th each year, I was going to go with the true meaning of Memorial Day rather than making anything related to summer.

When a Canadian soldier dies in Afghanistan, their body is brought to Trenton Air Base in Ontario, which is about an hour east of where I live.  The body is then transported in a motorcade, which includes his or her family along the main highway to Toronto.  The section of the highway from Trenton to Toronto has officially been named Highway of Heroes.  It is always announced which day the soldier will be brought home and the motorcade always travels at the same time so people line the overpasses with their flags to pay respect to the soldier.  There is always at least one police car, ambulance and fire truck with lights flashing and the first responders standing on the vehicle to salute as the motorcade passes.  Ordinary people traveling the highway at the same time drop back so as not to interfere with the motorcade and people trying to enter the highway at any interchange wait until it passes.  This happens in the warm sunshine, the pouring rain, a snow storm and when the temperatures are well below freezing.

I have included a verse inside and while the colours are not those usually thought of for a sympathy card, certainly the beautiful image and the sentiments are appropriate and could be used as such.


I hope you will all choose an image from Isabella's Sketchbook and join the challenge with your lovely creation about Memorial Day.  Isabella has so many appropriate images no matter what Memorial Day makes you think of.  While you are checking out the challenge, take a look at all the wonderful cards made by the other design team members, visit their blogs and leave a comment.  I know they would love to hear from you. 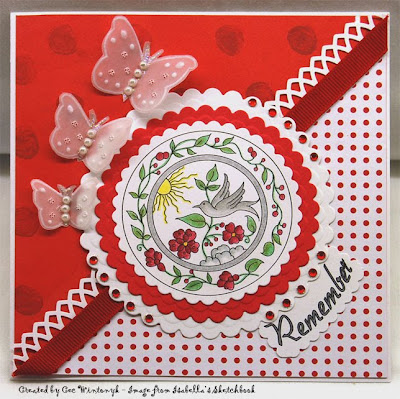 The image from Isabella's Sketchbook is called Garden Party Round and has been coloured with a combination of Prismacolor and Koh-I-Noor pencil crayons.  The paper is from Daisy D's and Recollections (Michaels).  The card stock is Recollections (Michaels).  The sentiment is computer generated.  The butterflies were made of parchment paper using Pergamano techniques and then hand cut.  Other supplies used:  Star Dust Stickles (Ranger), Pearl Stickers (Recollections from Michaels), Mini Gems (Dollarama), Border Punch (Martha Stewart) and Ribbon (Michaels).
Posted by Cec at 8:00 AM