The fifth challenge for ITAC'17 is The Americas.  As with the other challenges there is a list of elements, at least one of which must be included (I used two this time - the green paints and something sharp) and this time there is also a mood board.

The judges have created their usual awesome inspiration but something struck me right off the bat - the mood board photos and the description of the inspiration pieces focus mainly on The United States and South America.  Certainly these are areas in The Americas but there are so many countries - 55 located in South, Central and North America as well as the Caribbean.  I live in Canada and we are the 6th largest country by population and the largest by area so naturally I wanted my project to focus on Canada. 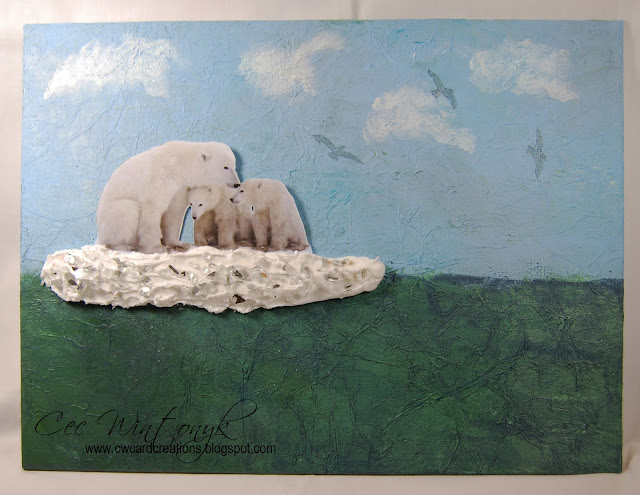 I decided to make a statement piece.  Canada has a vast area of the north that is cold and usually covered in ice and snow.  Lately however, the changes in our climate have made sections of the ice break apart and there are larger areas of open water in the southern parts of the north.  This is devastating for the polar bear population and is causing a decrease in the number of animals in the wild as the migration gets more perilous for them.  My canvas shows a Mother and her two Cubs on one of the ice floes and I can only imagine them wondering how far it is to the next one is.

So now I had a concept but how to execute it, which proved more difficult than I thought.  As you will see, I changed direction part way through and in the end I wish I could have come up with a jazzier submission but despite its simplicity, it does say what I want it to. 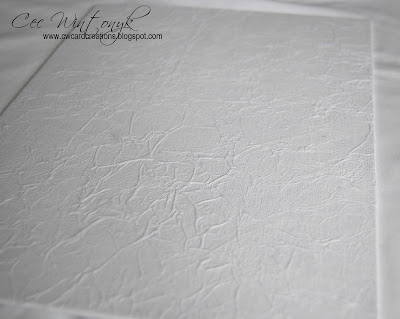 I started with a 9"x12" canvas (Dollarama) and gave it a coat of White Gesso (Liquitex).  I crumpled up some tissue (Dollarama) and adhered it to the canvas using Mod Podge. 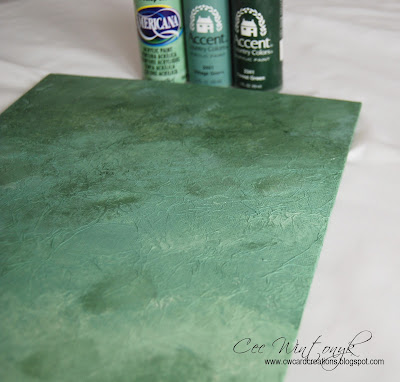 Next I painted it with three shades of green paint - Mint Julep (DecoArt), Village Green and Forest Green (Accent). 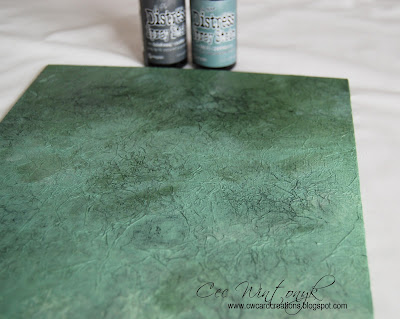 I was intending for this to be nothing but open water and very foreboding so I spritzed it with some Iced Spruce and Hickory Smoke Distress Spray Stain (Tim Holtz for Ranger).

I covered it with plastic wrap to show the shine of the water and then I added some sections of texture paste to replicate ice floes.  This is where things changed so there is no photo.  I hated the result so quickly scraped off as much texture paste as I could save and then peeled off the plastic wrap and tossed it in the garbage.  Thankfully it did not peel the paint off. 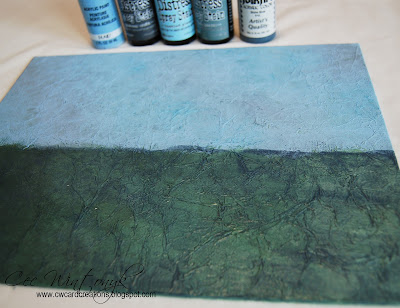 I painted over the top portion of the canvas with some Light Blue Acrylic Paint (Folk Art) and sprayed it with the Distress Spray Stains, adding some Tumbled Glass as well.  Then my water looked way too green so I covered it with some watered down Slate Blue (Folk Art). 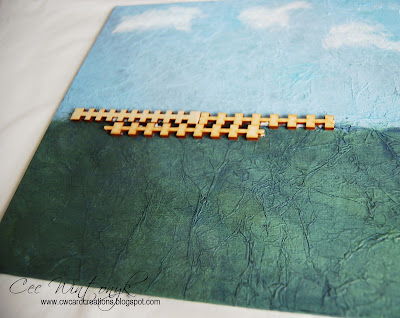 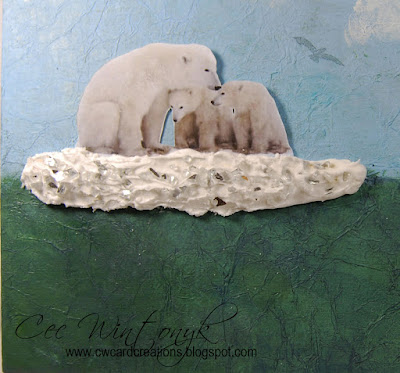 Next I added some scraps of wood that I rescued from the garbage in my husband's workshop and glued it on with Super Thick Slap it On (IndigoBlu) to make a base for my ice floe.  I fussy cut the bears from an image I found online and then covered the floe with Light Molding Paste (Golden and added mirror chips (Michaels).

Finally, I sponged some white paint on to make a few clouds and then added some flying gulls with tracing paper and coloured them with a grey pencil crayon (Prismacolor).

To see all the other takes on The Americas, click HERE.
Posted by Cec at 5:01 PM