What the world needs now... 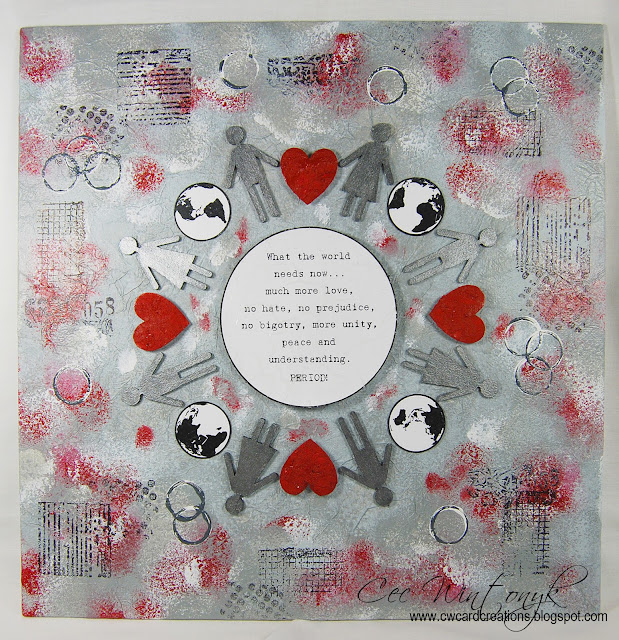 This is my project for the Grand Final of ITAC'17 - The World.  The sub text for this challenge is United We Stand, Together We Connect so I used that as my inspiration.  There is another list of elements of which at least one must be incorporated in the project.  I used circles, the colour white and most of the words listed.

I took a couple days off this week to celebrate my husband's birthday and our 42nd wedding anniversary so I am running behind, which means no process photos but I will describe what I did and give you some close-ups..

I covered a 12"x12" flat canvas panel (Artist's Loft) with crumpled up tissue paper using Mod Podge.  This is my go to technique for adding a bit of texture when I know I am not going to use stencils and texture paste. 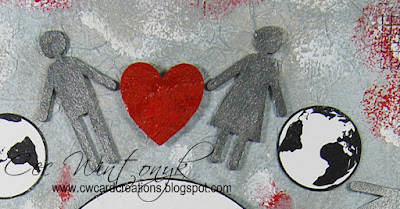 Next I prepared my focal point.  My husband cut the people silhouettes from chipboard (Bazzill) and I coated them with Black Raven Metallic Paint (IndigoBlu).  This paint doesn't dry really black but is more of a gun-metal colour with shimmer.  I drew the hearts on the computer and fussy cut them before adding some texture to them with Crackle Paste (Golden) and then Dark Scarlet Acrylic Paint (DecoArt).  A little aside:  I have a jar of of Golden Crackle Paste that has dried out in only a few months despite being perfectly sealed and stored in a plastic bin with a lid.  I don't want to throw $13.00 plus tax away so I am adding a touch of water to it and using it like texture paste now.

I found the globe circles on the internet, scaled them down, printed them and fussy cut them. 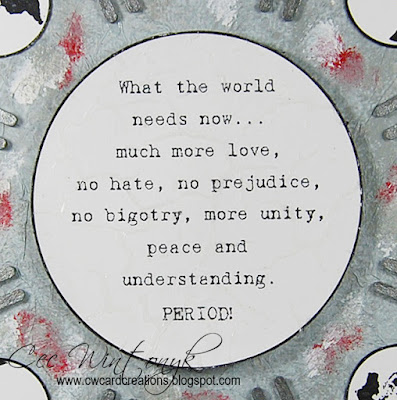 I created the sentiment in Photoshop inspired by one I saw online that had no credit.  Once it was printed and cut I decided to give it some subtle cracking (much like our world is cracking apart these days) by adding some Translucent Embossing Paste (Wendy Vecchi) through a crackle stencil (Prima) - a little difficult to see in the photo but it is there.

The people were adhered using Super Thick Slap it On (IndigoBlu), the globes were adhered with Double Sided Tape (Scor Tape) and I used Dimensional Foam to add the hearts and the sentiment.

I added lots of markings using Jet Black Archival Ink (Ranger) and stamps from a variety of sets - Ultimate Grunge, THMM101 (Tim Holtz) and Large Collage (Wendy Vecchi).  Finally I used the cap from a water bottle with some White Gesso (Liquitex) and Stormy Gray Acrylic Paint (DecoArt) to make some circles.

Now if only the leaders of the world would set an example for the citizens of the world to unite the way my little people have.  We are only on this planet for a brief time, so let's make it a happy time.

Thank you to the organizers, artists and judges of ITAC'17 for such a fun tournament.  I was really challenged both by the topics and the time frames but I stuck with it and had a great time.