I am back from the trip to Alberta to move my Mother-in-Law into a senior's lodge.  My husband and I are totally exhausted but feel good because we managed to get her packed and moved, her room set up with some new pieces of furniture, lots of family photos and some petit point on the walls and then her house totally emptied - all in 5 1/2 days.  The hard part was going through years and years of stuff to ensure that we didn't throw anything out that should be saved.  In the process we found some interesting things, such as magazines from the early 1950s and some really odd things, such as 11 plastic juice containers and close to 100 plastic margarine tubs.  People of her generation don't want to waste anything so needless to say she was pretty upset with me when I threw food out the morning of the move.  Of course it was all partial packages and you can't give it to anyone but she couldn't see that - if it was good enough for her, it should be good enough for anyone.  At the end of it all, we breathed a sigh of relief because she is so much safer than she was by herself and it turns out she had already seen 10 people she knew so now she will have more company.

Since I came home late Saturday night, I have been catching up on all the things I should have done last week and was finally able to sit down and craft a bit this afternoon.  I had started this card before I left but when I went to finish it today, I found my mojo had taken a hike and I struggled to embellish it.  In the end, I decided the cleaner looking the better so the image would stand out.  I have always wanted to try my hand at paper-piecing and thought this image from Daisy Doodles new store would be perfect for my first attempt.  The image is part of Card Kit #3.  The whole image has been paper pieced, including the little green stem and while I think it turned out well, I am not sure that it is one of my favourite techniques.  By the way, all the gourmet cupcakes that you see cropping up are covered in icing so that is how I did mine but Daisy intended the band above the cupcake liner to be actual cake.  Of course, how you do your cupcake is your choice. 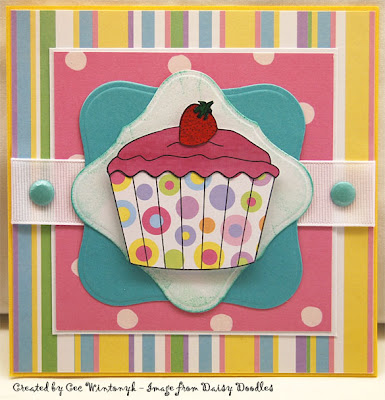 I am going to enter this card in the following challenge:

The image is called Cupcake.  The papers used are from a couple of Provo Craft Scrap Packs and the card stock is Recollections (Michaels).  Other supplies used:  Card Candy (Craftwork Cards), Nestabilities (Spellbinders), Ribbon (Fabricland) and Ink (Color Box).
Posted by Cec at 8:46 PM