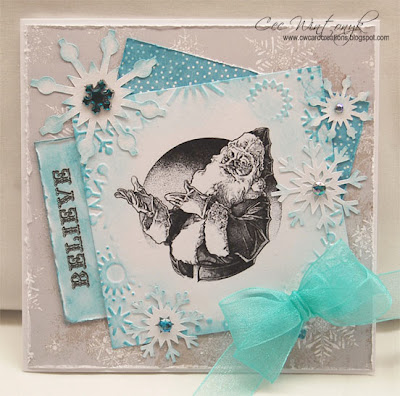 It is time for another two-week challenge at Sugar Creek Hollow called VINTAGE CHRISTMAS.  We want you to make vintage or shabby chic Christmas cards, table decorations, ornaments or decor items.

Avril Branthwaite is joining us as a Guest Designer for this challenge so pop over to her blog and check out her work and make her feel welcome.

This card was so easy to make and is thin enough that I should be able to pay regular postage for it.  I started with Staples card stock for the card blank and then added a couple of background paper from Summertime Designs.  The sentiment is computer generated.

Next I printed the Santa image that I found online but now can't find in my computer so I apologize for not giving proper credit.   The Santa panel was embossed it with the Cuttlebug Snowflakes embossing folder and Tim Holtz Circle Diffuser.  The snowflakes were cut on my Cameo and I added some gems from my stash.  Everything was inked with Tumbled Glass Distress Ink from Ranger.

Finally, I added a double bow of organza ribbon that I bought at Michaels.

I am going to enter this card in the following challenges: 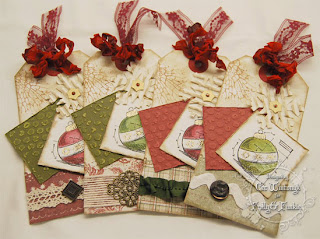 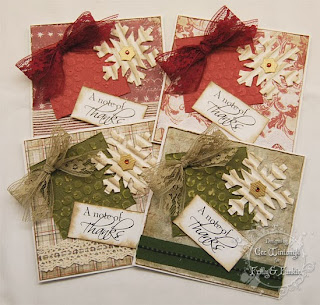 The challenge for the next two weeks at Frilly and Funkie is called Gift Tags and Note Cards, both of which should be in high demand with Christmas fast approaching.  You can make one or the other or even both if you like but make sure they are vintage or shabby chic.

I got really ambitious to start with and decided to make a set of four of each and began with the gift tags.  To make each tag, I took some white card stock and cut it into a tag shape.  Then I used a chewed up old sponge dauber and swirled some Frayed Burlap Distress Ink on it to make the background.  I punched a circle from some dark red card stock, added it to the tag and then punched a hole in the centre of it.  Finally I stamped a little background feature from the Tim Holtz Ultimate Grunge set.

Each tag has a border of patterned paper from the Maja Designs It's Christmas Time paper pad and before I attached it to the tag I cut the top edge with a Martha Stewart edge punch.  Then I added some fibre across the patterned paper using ribbon and large ric rac from my stash along with some May Arts crochet lace and jute ribbon from The Funkie Junkie Boutique. A button, brad and filigree metal piece were added to three of the tags.

Next each tag got a panel from Tim Holtz color core card stack and embossed using the Tim Holtz Bubbles Texture Fade and a panel stamped with the ornament from a Tim Holtz mini blueprint set.  I coloured the ornaments with Prismacolors blended with Gotrick odorless mineral spirits.  A gold Sakura gel pen was used to highlight the cap and the decorations on the band.

I cut the snowflakes from white corrugated cardboard with a Spellbinders die and highlighted them with some of the Frayed Burlap Distress Ink.  A gold card centre and a teeny gem finished them off.

Finally, I dyed some seam binding with Aged Mahogany Distress Ink and added it to the top along with some lace seam binding from my sewing cupboard.

I have been sick for a month (it started with a cold and then I had a reaction to an antibiotic) so I fade pretty quickly and by the time I finished the tags, I must admit I didn't really have the energy to go all out on the set of note cards.  I should have really concentrated on doing one of each.  Mind you I can't put much texture on the note cards if I intend to mail them because the post office charges extra for thickness so let's use that as my excuse :)  Oh, and I think I am finally turning the corner and will survive.

What I decided to do was make simpler cards that complimented the tags and used some of the same elements with a few twists.  I have used the same Maja Designs papers, made the same embossed panels and snowflakes but I have put the bands of fibre on a little differently and used just lace seam binding in two shades.  The sentiment is computer generated.

The following items used to create these projects can be found at The Funkie Junkie Boutique: 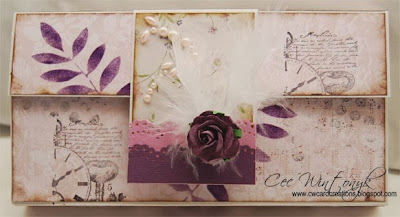 I decided to make a box, not only because I suspected there would be a lot of tags but also because my daughter has a birthday soon after Christmas and since I have already bought her birthday gift I know that it will fit perfectly in this Wallet Box.

Here is a look at the back and sides of this box. 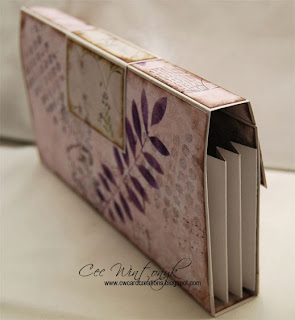 I cut all the pieces for the base from some Recollections card stock and scored everything.  The base, except for the accordion sides was put together using double-sided tape.  Then I cut all the patterned paper for both the outside and inside making sure to leave a small border.  The patterned paper is digital paper that I got as a freebie from Far Far Hill.

The next step was to do some stamping over all the outside pieces, except for the piece on the closure, which matches the inside paper.  I used one of the stamps from the Tim Holtz Ultimate Grunge set as well as a Paper Artsy Mini.  Black Ranger Archival ink was used for the stamping.

Then I stenciled the leaves on using Dusty Concord Distress Ink by Ranger and a stencil called Botanical by Momenta.  The last step before gluing the patterned paper to the base was to ink all the edges with Ranger's Pumice Stone Distress Ink.

The embellishment on the closure involved cutting two scraps of card stock and taking a Martha Stewart edge punch to them.  After they were adhered to the closure, I added some pearl flourishes from Dollarama, some feathers from my stash and a deep purple rose from Wild Orchid Crafts.

Finally, I added the accordion sides and some adhesive Velcro dots to keep the closure in place.

Addicted to Stamps - Anything Goes
City Crafter - Hold It
Posted by Cec at 8:00 AM 9 comments: 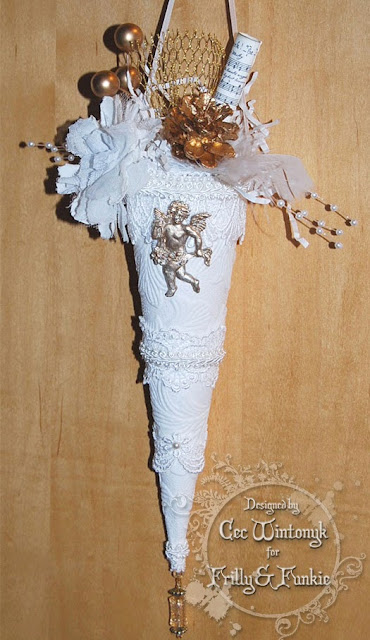 I know this a huge photo but I really wanted you to be able to see what I made for the new challenge at Frilly and Funkie.  The challenge is called CHRISTMAS PREPARATIONS and our hostess Sue wants you to make shabby chic or vintage items for your table, your tree, your holiday decor or even crackers for your Christmas dinner.

I have made a Tussie Mussie to hang on my tree and since this is a big one (10") it will fill in one of those pesky bare spots.  Now my tree is primarily decked out in red and gold but I do have a few gold and white ornaments so that is why I made this in these colors.

On November 30th, I am going to do a Step X Step feature over at Frilly and Funkie and show you how this was made so plan to pop over there for all the details.

I used trim, pearls, a brad, feathers, a pine cone, beaded trim and gold balls from my stash and I used the following products from The Funkie Junkie Boutique: 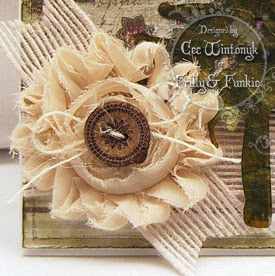 It is my turn to host the Friday Focus at Frilly and Funkie and this week I am sharing projects made with May Arts products, including a new card that I am teasing you with above.  To see the finished card and find out how I made it, pop over to Frilly and Funkie.

From now until next Thursday, the May Arts products at The Funkie Junkie Boutique are 15% off the already discounted prices so now is a great time to stock up - and don't forget to check out the rest of the shop while you are there.
Posted by Cec at 2:00 AM 1 comment: 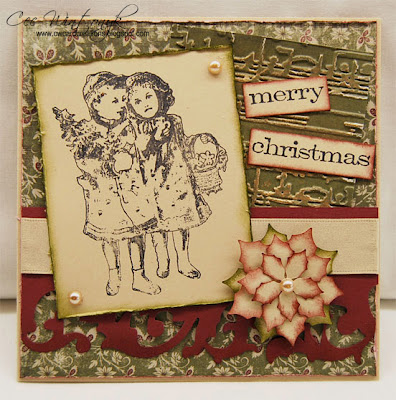 The challenge for the next two weeks at Sugar Creek Hollow is ANYTHING VINTAGE GOES so that means you can make anything as long as it is vintage or shabby chic.

Since we are able to make anything this time I decided to try to grow my very small stash of Christmas cards.  In Canada the cost of mailing a letter or card depends more on the weight and the thickness and we don't get penalized for the shape.  So that means we can mail square cards with no extra postage provided it fits through this itty bitty little slot that the postmaster has.  As a result my Christmas cards have to be pretty flat like this one is or I can expect a hard time from my dear husband since they were too thick one year and he had to buy extra postage and stand there and put it on each and every card.

For this card I used card stock from Recollections for everything but the background and that is from a paper pack called Norland from Farm House Paper Company.

The image is from an Artistic Outpost stamp set called Sleigh Ride and has been stamped with Black Archival Ink from Ranger.  I used the Sheet Music Texture Fade by Tim Holtz to emboss the green panel and then highlighted it with Classic Treasure Gold from Connoisseur Studio.  The scrollwork panel was made with a Tim Holtz die and then some Fabricland satin ribbon was added to it.

The sentiment has been stamped with one of the stamps from the Simple Sayings stamp set from Tim Holtz.  The Poinsettia was cut with my Cameo.  Pearl stickers from Recollections were added to the centre of the poinsettia and to the image panel.  Aged Mahogany and Forest Moss Distress Ink from Ranger were used to ink the different elements.

I am going to enter this card in the following challenges:

The following items were purchased at The Funkie Junkie Boutique.