The new challenge at Sugar Creek Hollow this time is called Tag, You're It and we want you to make vintage or shabby chic stand alone tags or put them on your cards or other projects.

I have never participated in one of the Tim Holtz tag challenges but thought I would give it a go this month (12 Tags of 2014 August).  I checked out his tutorial and then started digging through my craft room to see what I had on hand to accomplish a tag that sort of resembled his masterpiece.

Since I followed the tutorial pretty closely, I won't repeat the steps here but will just give a list of supplies this time:

This was a ton of fun to create and I might have to tackle another one soon.

Besides Tim's challenge, I am going to enter this tag in the following challenges: 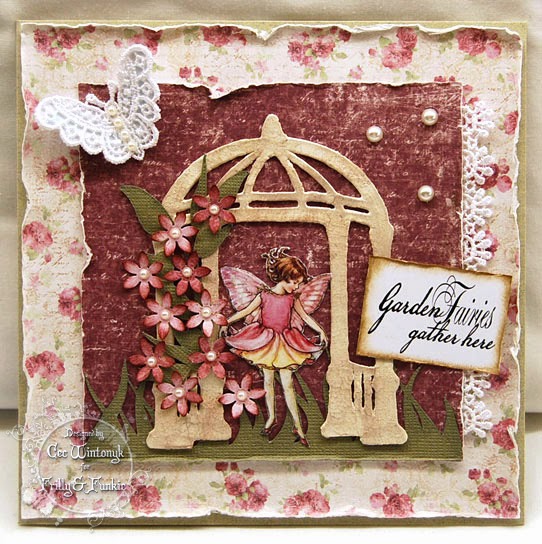 It is time for a new challenge at Frilly and Funkie and I am the hostess this time so I chose a theme called A Summer Garden.  I want to see your vintage or shabby chic projects that remind you of a summer garden.  It doesn't have to be just flowers but could also be the landscaping or even fruits and vegetables.

Share your Summer Garden projects with us to be in with a chance of winning a Guest DT spot at Frilly and Funkie or a $25 spending spree at The Funkie Junkie Boutique! To enter you must create a new project, link it using the linking tool and make sure you add a link in your post back to this challenge. You can combine our challenge with up to 10 challenges (including this one) to be in with a chance of winning. If you are entering through a public forum please sue the keyword F&F. Also, please be sure to turn off your Word Verification so our Design Team can leave you comments.

I don't have a veggie garden anymore although I wish I did because nothing tastes better than freshly picked produce.  I do have greenery and some flowers, mostly in pots so that is where I went with my card for this challenge.  It is also a bit of a wishful thinking type card because I also don't have a gazebo or climbing flowers.

The gazebo was cut on my Cameo from Tim Holtz grunge paper and given a coat of gesso.  Then I decided to add some texture with texture paste before I painted it with some Picket Fence Distress Crackle Paint and swiped on some Frayed Burlap Distress Ink.

The grass and leaves were cut on my Cameo from Tim Holtz Color Core card stock and then inked with some Iced Spruce DI.  The little flowers were punched with a Marvy Uchida punch using all the scraps of Maja Designs paper and then I added some little pearl stickers from Recollections as centres and inked the edges with Aged Mahogany DI.

The sentiment was created on my computer and inked with some Frayed Burlap DI.  The sweet vintage fairy is from Israblog online.  The butterfly is a venise lace applique and I added a row of pearl stickers from Recollections for the body.

I hope you will pop over to Frilly and Funkie, check out the wonderful DT projects and then come back to show us one of your creations.

The following products used to create my summery card came from The Funkie Junkie Boutique: 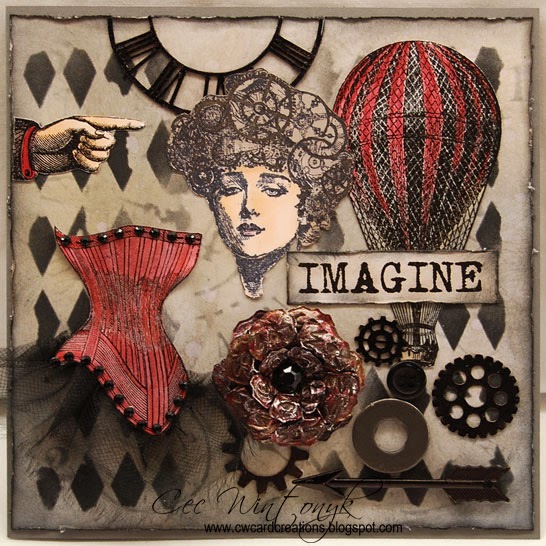 Other embellishments are gears from Bead Landing and a metal arrow from The Paper Studio that I coloured with a black Copic marker, a washer from my husband's tool box and a black button from my sewing room.  The flower is made from paper-backed metal tape used in the heating and air conditioning industry.  It was cut using the Tim Holtz Tattered Florals die and textured with an embossing stylus.  Then black acrylic paint was applied and immediately wiped off leaving paint in the depressions.  One it was dry the highlights were inked with Cranberry Alcohol Ink from Ranger and a black gem was added for a centre.
Posted by Cec at 1:30 AM 4 comments: 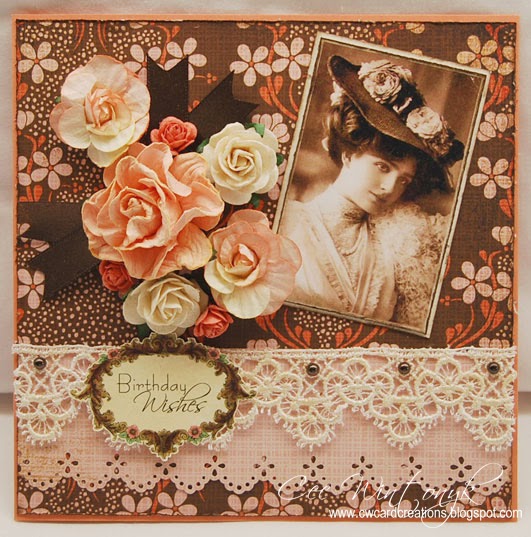 The new challenge at Sugar Creek Hollow starts today and it is called Let's Celebrate.  We want you to make vintage or shabby chic celebratory cards for birthdays. weddings, anniversaries, etc.

I decided to make a birthday card for a woman and use up some patterned paper that has been in my scrap stash for ages - so long I can't remember who made it.  It was two-sided and I used the floral side for the background and the plain side for the panel that I punched with a Martha Stewart edge punch.

I added a piece of lace that I bought from an outlet in Fancy Gap when I was visiting my friend Patti.  I added some pearls from Dollarama and then topped it with a sentiment that is inside a fancy frame from The Graphics Fairy.  I coloured the frame with some Bic markers.

The image is Lilly Elise from Imogemes and she is mounted on a piece of card stock that has been inked with some Walnut Stain Distress Ink from Ranger.

The flowers are from Wild Orchid Crafts and from Excelsior Wholesale and the brown ribbon is from Fabricland.
Posted by Cec at 8:00 AM 6 comments: 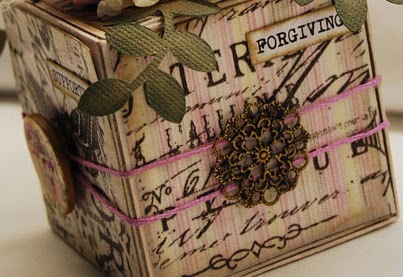 Today it is my turn to present the Saturday Step X Step at Frilly and Funkie and as I promised on Wednesday, I am going to give all the details about how I made my Artist Trading Block for the current challenge.  Here is a little peak at one of the sides of the block.  Pop over to Frilly and Funkie to see all the steps.
Posted by Cec at 2:00 AM 1 comment: 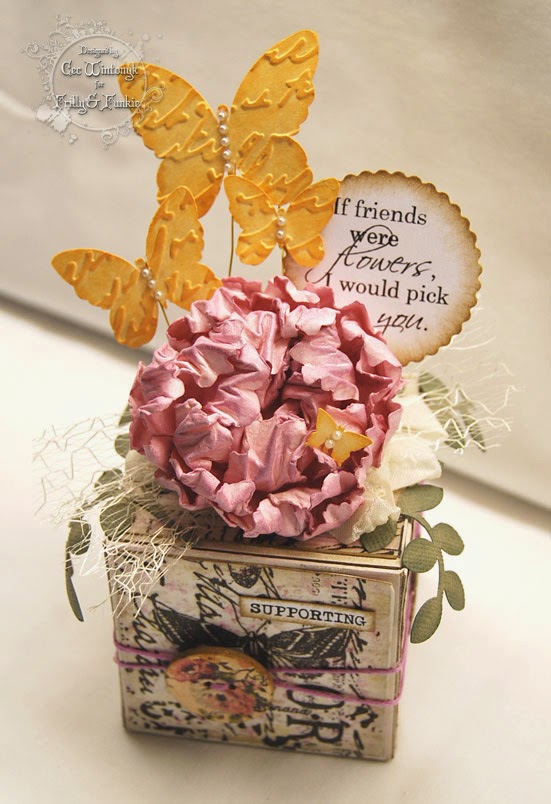 The new challenge starts today at Frilly and Funkie and this time Jenny is our hostess. She is calling it Hip to be Square and she wants you to create a 3D vintage or shabby chic project based on a cube shape.

The Design Team have used Artist Trading Block cubes (available at The Funkie Junkie Boutique and further discounted by 15% for the length of this challenge) but let's be clear, you can use your own templates, dies or hand cut cubes if you would prefer. Decorate, embellish and alter them in any way you choose as long as they are cube shaped and have a vintage or shabby chic feel.

For this challenge we are teaming up with our friends at 'The Artists on the Block'. They have a dedicated Design Team using Eileen Hull Designs cubes (and many other 3D die cut shapes) in incredibly imaginative ways so make sure you take a look for some added inspiration. Their companion challenge blog 'Art With Heart' is having an 'Anything Goes' theme this month so you've got the option to enter your creations there as well to be in with a chance to win a brand new Eileen Hull Designs die!"

My little box is only 2 1/2 inches square on each side so I decided to go over the top and create a super-sized peony for the top.  I am going to be hosting the Saturday Step X Step feature at Frilly and Funkie on August 16th so come back then to see how I made the flower and put all of this together.

I am going to enter my project in the following challenges:

Art With Heart Challenge - Anything Goes

In the meantime, I will tell you that I got all of these products from The Funkie Junkie Boutique to make my little block.

The Funkie Junkie Boutique is having a Sizzix overstock sale. From now through August 11th, all in-stock Sizzix products are an extra 15% off. That includes Tim Holtz Alterations dies and texture fades. Some of the older dies are discounted even more. The sale does not include pre-ordered products.

Check the 'On Sale' tab at the boutique to see what's on sale. It's a great time to stock up on all the seasonal dies and texture fades.

Shop early because quantities are limited.
Posted by Cec at 7:52 AM No comments: 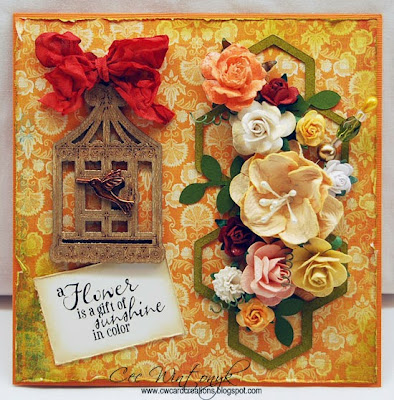 It is time for another new challenge at Sugar Creek Hollow and this time we are calling it SUMMER SUNSHINE.  We want to see vintage or shabby chic projects with the bright colours of summer - oranges, reds, strong yellows, etc.

Many of my neighbours have trellises in their gardens with climbing roses or clematis but since I don't, the closest I can get to having a trellis is to put it on a card.

I started with some Bazzill card stock for my blank and then added a background paper from Basic Grey.

The hexagon "trellis" was cut from Tim Holtz Grunge paper on my Cameo and then I sponged it with Crushed Olive Distress Ink from Ranger.  Next I added all the climbing roses from Wild Orchid Crafts and some twirls from the cut-off flower stems.  I made the stick pin by adding some beads from my stash to a pearl-headed pin from Dollarama.

The bird cage is a wooden die cut from The Paper Studio and I rubbed it with Classic Gold wax paste from Treasure Gold.  The crinkly bow is some Hug Snug Seam Binding that I dyed with a mixture of Aged Mahogany and Ripe Persimmon Distress Inks from Ranger.  The bird is a silver charm from Arton Bead Supply and I re-coloured it with Terra Cotta Alcohol Ink from Ranger.

Finally, the sentiment is from Create with TLC and I distressed the edges with my scissors and inked it with some Ranger Antique Linen Distress Ink.

I am going to enter this card into the following challenges: